The reigning Supercars champ has a perfect weekend in Adelaide, but teammate Jamie Whincup has a tougher start to his season.

Two races, two poles, two wins; starts to championship defences don’t get much more emphatic than that, which explains why Shane van Gisbergenleft Adelaide sporting a healthy grin after getting the 2017 Supercars season off to a perfect start at the Clipsal 500 last weekend.

The Red Bull Holden Racing Team ace dominated the weekend, winning Saturday’s 250km race by a whopping 14.7 seconds, and then chasing down and passing Scott McLaughlin (DJR Team Penske) with three laps remaining on Sunday to score a maximum 300 points.

Saturday was plain sailing for SVG, but Sunday was a different story, overcoming a 5.3sec deficit to McLaughlin after the final pit stops, overtaking his compatriot after a mistake at Turn 9 and extending his lead to 10 seconds at the flag.

“What a huge weekend, we all worked so hard,” SVG said afterwards.

“It’s a great start to the year, everyone has pushed through the off-season and everyone really deserves this result. It was a hard race, I had some fun battles. I struggled at the start, lost some time, it was all happening. Coming into the weekend we had a fair few unknowns, but it’s great to know that we know how the car performs, we know the car is fast.” 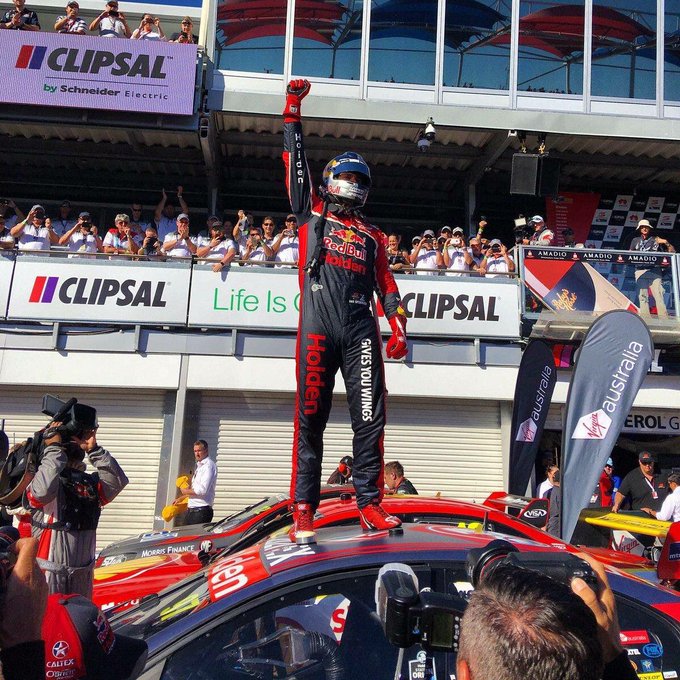 In scary news for the rest, SVG managed a clean sweep despite the vibration issue that reared its head at the pre-event Sydney Motorsport Park test recurring on Sunday, which the Kiwi admitted made his life “uncomfortable”.

If van Gisbergen’s weekend was smooth, RBHRT teammate Jamie Whincuphad quite the opposite, the six-time series champ finishing sixth on Saturday and Sunday to be placed in (you guessed it) sixth in the championship standings, 96 points adrift of his stablemate.

An early pit stop in Saturday’s 250km race didn’t pay off for Whincup, and he later tangled with Mark Winterbottom en route to a sixth-place finish. Sunday’s race was made more difficult when a kerb strike penalty saw him start from 10th on the grid, and while an early stop and a full tank of fuel had him well placed to strike had a safety car period ensued, the race went the full 78 laps without an interruption, leaving Whincup in sixth again, half a minute behind Van Gisbergen.

“We just can’t take a trick with the strategy,” Whincup lamented afterwards.

“We put a heap of petrol in and really relied on a safety car. Who would have thought there would be no safety car in 250 kilometres! All in all, we had good car speed. Massive congratulations to SVG, awesome team result. I just wish car 88 had contributed more than it did.”

The third member of the Triple Eight triumvirate, Craig Lowndes, finished eighth and 10th in the two races to be placed eighth overall in the championship after its opening weekend.

The TeamVortex Holden veteran lost places late in the race on Saturday as he had to conserve fuel to make it to the finish, and said he was “satisfied” on Sunday after making up five places across the 78 laps from a lowly starting position of 15th.

The next round of the championship proper comes at Symmons Plains in Tasmania from April 7-9, but before that, the Supercars series steps out for a non-championship event at Albert Park as part of the support card for the opening Formula One race of the season, the Australian Grand Prix from March 23-26.

By Matthew Clayton for Redbull.com